No 3: Influences and idiosyncracies

Time check – 1976. Musically, my ears had been filled by a glorious and rewarding period of listening. Electric jazz had been stirring me most for three or four years and I was influenced by the various drummers that Miles Davis, Herbie Hancock and Weather Report employed. There were many others of course in other genres.  As players, they occupied a different planet to me but I followed the ethos (still do) that you make your own personal stamp and style. It’s all part of being your own man.

English drummer / singer Robert Wyatt had been an inspiration for some years. He made his own playing style by a mixture of following his own intuition and not being super-technical. I warmed to his individuality and his spirit, and his social circumstances were nearer to me than the super hero drummers through the ages and all the brilliant college graduates that followed in their wake.

Wyatt’s own drumming career was cut short by a major accident which caused him to become wheelchair bound but he reinvented himself as a singer who Elvis Costello described as ‘the most individual voice in English pop.’ Wyatt’s early playing provided a blueprint for drummer Chris Cutler to take a lot further, initially with the group Henry Cow and latterly with too many to mention. Cutler’s playing was a polar opposite to the jazz and groove players I’d taken to heart but I picked up some particular and idiosyncratic elements from him which I added to my playing – a kind of free flow stream of consciousness that wasn’t to do with holding down a line but snaking in, out and roundabout – playing like a moving target but with strong intent and purpose. When I first started playing with The Work, I needed this approach as the music, although tightly and densely written, was also restless and didn’t hang around anywhere for very long. I’ll return to that further on.

What then followed was a year of challenging old habits and trying to create credible idiosyncracies. This involved trying to make the knowingly naïve sit happily alongside sturdy rolling polyrhythms. It was a very experimental period and also when I was making records for the first time. Getting to be able to produce the goods when the red light was on was a new adventure. My co-conspirators at that time were The Family Fodder and People in Control who both aspired to make very off -centre pop music. It was during this period that I was inducted into roots reggae and the radical world of the dub mix. Once again, the way I saw it was not to mimic blindly but to incorporate facets of these styles into my playing and to know when to bring them to the fore. This involved a lot of listening and practical application. Also, at this time, I was listening to an increasing amount of non-western music which seemed to throw the doors wide open when it came to exploring rhythm and its endless possibilities. The concept of rhythm in Indian music is a deep and vast area of exploration – practically a science. I listened from a distance, unknowingly. I didn’t have a key that fitted that particular door but, not far ahead, I would find a locksmith who would create one for me. 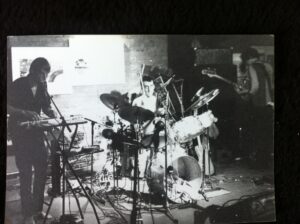 Rick in action with The Work in Wurzburg, Germany in July 1981

I was next asked to be the drummer in a new group just forming. It would become The Work and would be a major step upwards. The Work was just that. A very intense initiation in total commitment to the cause. Eight hour rehearsal days learning complex music that required me to find new ways to play. The guiding force of the group was Tim Hodgkinson, a highly talented and driven musician I had admired previously from his time in Henry Cow. Tim played keyboards and reed instruments and was developing as a flat (slide) guitar player and singer. He also composed very demanding music. Our quartet made a fearful, uncompromising sound and no money but we toured Europe extensively and made records. I felt fully-fledged though somewhat marginalised  by our ‘super independent’ stance. I gained immeasurable experience from the two years I spent in this company but my ears were hearing more and more  music from far flung places and these sounds seemed to be voices calling me to up sticks and away.

After two years in this hothouse, I announced that I had intentions to travel. Despite the tempting prospect of a tour of Japan, I made the decision to leave the band. It felt like a huge leap into the unknown with no turning back. It was, and it wasn’t………………………

Voices from Off Centre

A Slave to the Rhythm – Part 4
Scroll to top