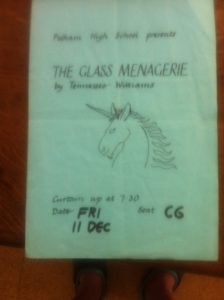 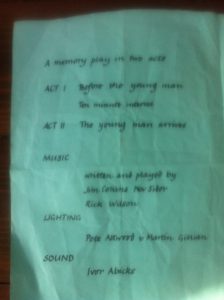 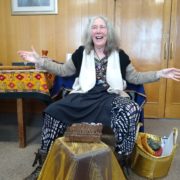 Like so many others in the world right now, our live activities are on hold because of lockdown restrictions. We clearly have no idea when this situation is likely to change. However, we have not been idle in this time. 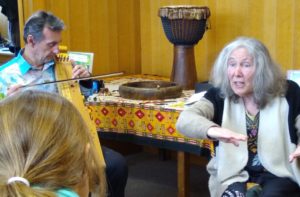 Just before we knew that lockdown was imminent, we took part in a joyful event organised by Extinction Rebellion in Oswestry.  With an inspiring display of the group’s recent activities, lots of things for kids to do and a hall buzzing with repair of tools and equipment, the day was a great reminder of how looking after our planet can bring people together to have a good time too.  We told two stories about how people are bound into their local environment, and how if we look after the natural world we reap the benefits in unexpected ways.

When we realised that the summer’s live performances could not go ahead we took our first steps into online broadcasts. On May 12th both Helen and Rick were interviewed via Amy Douglas’ webinar hook-up as part of ‘Taking the tradition on’: https://www.youtube.com/watch?v=VupjQStU4mw

Two days later we went live in ‘performance’ as part of Amy’s monthly ‘Get a Word in Edgeways ‘ webinar. 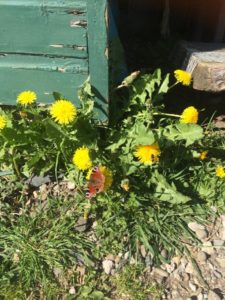 At home in Llansilin we are appreciating the loveliness of the early summer. Helen continues to write and Rick continues to compose and record, awaiting the green light to be able to put the finishing touches to his forthcoming album ‘Voices From Off Centre’.

Welcome to our new website, updated in time for the 2019 summer season.

Many thanks to Oswestry based web designer Jewelion for setting up our new site. We hope that you will find it easier and more attractive to use, but please do tell us if you run into any glitches as you browse so that we can iron out any teething troubles.

Among the new features on the site is our online calendar, which should enable you for most public events to click a link straight to the venue or organiser for ticket bookings.

We hope to fill the new site with pictures to tell our stories and give a fuller flavour of our work. If you’ve enjoyed one of our events and taken photos there, please do send us a pdf or jpeg file so we can add your pictures to our gallery (though please note that permission must be given for any photos including children).