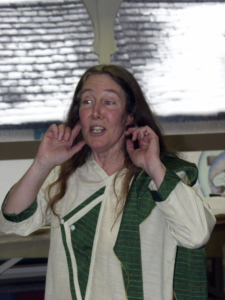 Helen was born in Colombo, Sri Lanka. She grew up listening, learning and tuning her tongue in England, Norway, Nigeria, Italy, Iceland and Ireland, telling stories to send her sister to sleep and writing cliff-hanger serials for her friends.

She finally settled in London in 1979, when she met Rick. Since 2003 they have shared their time between London and Wales, with a home just over the border from Oswestry.

Helen continues to travel whenever she can to record and to write, to tell and to teach, and to enable others to ‘journey’ with her. Her ears and eyes are always open to anything connected with oral lore, memory and the changing world.

Besides a wealth of solo and collaborative storytelling experience, Helen’s formal qualifications include a BA in English from York University and a PGCE from the Institute of Education. She is the author of many books and recordings for adults and children and has developed a variety of educational resources. Her projects have led to countless school and community events, performances and exhibitions, and her teaching and facilitation have given a voice to refugee and disempowered groups at home and abroad.

A lifetime of stories: Helen’s CV (Click to read)

2021 Ebook publication of ‘The Place of the Sacred Snake’

2020 Online interview as part of ‘Taking the tradition on’ and performance in ‘Get a word in Edgeways’, both with Rick and organised by Amy Douglas. Link here.  Podcast interview with Amy here.

2018 literacy-based residency with Rick at Black Lane primary school, near Wrexham, in conjunction with Creative Partnerships Wales.
Storycloth based work with adults in London.

2017 commissions from Arts Connection Powys: storytelling as part of the ‘Wilding the Senses’ community garden project, and story / writing projects in two schools as part of ‘Arts Extravaganza’ scheme

2016 British Council commission to train storytellers in South Sudan
Training for National Trust staff and guides at Powis Castle.
With storyteller Amy Douglas, performed ‘Travelling Together’, an appreciation of some of the great storytellers and ballad singers of the travelling people of Scotland.

2011 –2015
With Rick, creation and performances of ‘The Moon’s two Wives’ (2015 – 16) and ‘Sounds of the City’ (Museum of London commission).
‘Collaboration with Apples and Snakes on ‘Spin’ CD project (2015)
Work in Jordan, commissioned by the British Council/ Apples and Snakes: intensive workshops for storytellers in 2014 – 15 and participation in Hakaya Festival 2015
‘City Fables’, a 60 minute story and sound collage recorded with Rick and broadcast in 2015 as part of the Apples and Snakes Home Cooking podcast series.

Book in a Day’ project in Flintshire, with artist Lucy Wells (2014 – 15)
Na Chllcied Na Chlo, a story and music Literature Wales Commission performed 30 times with Rick in 2014, in collaboration with TAULK (USA).
Contribution to ‘Stories for a Greener World’, published May 2014
White Crane – a meeting of Tai Chi and storytelling, with artist Lucy Wells (2014)
Publication of ‘London Folktales’ (History Press, 2013): 30 stories collected and retold by Helen, winner of Storytelling World Resource (USA) Award for 2015
The Kensington Palace project – 5 original stories for under 5s, written and performed in 2013
Festival of the Word 2013 – site specific story walks and performances around Islington and a writing/storytelling residency for children at Whitechapel Hospital,London.
Unicorn Theatre, London produce stage version of Helen’s 1988 picture book ‘Dora the Storer’ (2013) Click here for photos and reviews
Story development work at Keele University, at the Scottish Storytelling Centre, Edinburgh and at Ripley Arts centre, Bromley (2012)
term-long story/book-making and music project at Maesydre primary,Powys (with Lucy Wells and Rick Wilson, 2012)
publication of picture book ‘ How the Olympics came to be’ for the British Museum (2012) with promotional tellings at the Cheltenham and Word Up Fetsivals
‘After Offa: Living Life along the Border’ – community and social history research project with 4 schools in the Shropshire/Welsh borders, culminating in publication of CD, book and story map pack (2010 – 12).  Click here for more details.
One-off projects and events in schools and community venues across England and Wales, often with Rick, including work for Everyday Magic and Apples and Snakes.

‘Yatra’ and ‘The Trodden Path’: workshops, exhibition and performance commissioned by Surrey Libraries based on stories of Surrey based Asian families (2002/3)
SureStart ‘Ocean of Stories’ project with Bengali mothers and ‘Gift of the Gab’ adult storytelling course (2002)
Tutor for Poplar Partnership/ Museum of Docklands parents’ project (2002)
Storytelling tutor and resource material designer for Talk Tent – a National Theatre / Art of Regeneration project on tales of journeys (2001/2)
Many schools projects, mixed media performances, workshops and storywalks especially in Shropshire, the Welsh borders and London

1980 – 2000
Storyteller/tutor and overall producer of video and booklet resource pack for ‘Expanding the Frame – Telling Tales within the National Literacy Framework’: a National Literacy Scheme pilot project to explore the use of storytelling in the Literacy Hour (1998 – 99).
Director of Southwark ‘Storyswap’ (1997)
1990 – 1995
Director of Kent ‘Charting the Changes’ (1995/96)
director of ‘Breaking the Silence’, Shropshire oral lore project (1994)
Sunderland Childrens Live Literature Residency, culminating in publication of “Frances Fisher RIP,” a novel co-written with Year 5 and 6 children from four schools. This project won the 1995-6 Libraries Initiative Award (1993 – 94)
founder member of the National Society for Storytelling (1993)
Director of the National Folktale Centre (1987 – 90): 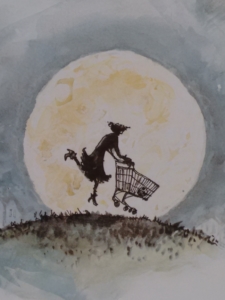 “Your stories transported me completely; I was with you all the way.”
(Faculty director, Viseu Polytechnic, Portugal)

“We didn’t have big books we had fun, and we sang, and wrote our own stories
so now we can help other classes to read”(Yr. 1 participant, Culloden School)