I had another five years of touring and recording with a reformed The Work to which I could now bring some of my new found musical attributes. It gave me greatly increased scope for how a drum kit could be played although, maybe perversely, it made me select and hone down to the essence how I chose to play something. Experience does give you choice.

From the 1980s to the present day, I’ve been developing my own music, whether it be manifested on record or in my workshops.  Such workshops tend to have an inclusive outlook. Unless specifically stated, beginners are always welcome and I tailor the activities accordingly. There are countless group activities to nurture and develop a sense of time, rhythm and beyond. These must be interesting and engaging, not terminally repetitive – that’s for personal, private practice. I incorporate many ideas and chunks of style from the many different people and styles I’ve been exposed to but I always attempt to mix them into my own personal take on them. I can’t claim that community drumming has taken off to the extent that community singing has done in the last 30 years but it has certainly become more visible. I like to think I’ve played a small part in this. 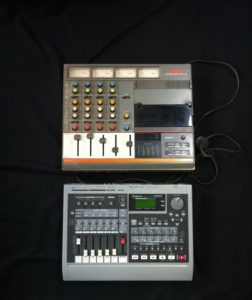 I first bought a cassette recorder when I was in my mid-twenties. Its portability allowed me to take it out and about and record anything that made interesting sounds. I didn’t realise it at first, but what I was doing was to start building an audio library resource of my own, that would later expand greatly, and give me my own private vaults to plunder when making original compositions. It could be the sound of machinery operating in a factory or building site, snatches of conversation or even music. I’ve always believed in harnessing all sorts of odder sounds alongside a more conventional range of instruments.

During the late 1980s, I shared ownership of a Fostex 4 track cassette recorder.

It was a radical upgrade that enabled an expanded process of recording to happen – multi-tracking!  This allowed me to take my first steps in composing original pieces which I then invited other musicians to add parts to. I eventually had enough material for a whole album which I then took to a ‘proper’ studio to tidy up and polish. I called this project ‘Pangaea Sound’ but it failed to ignite immediate interest and after a while I had to recognise its own shortcomings. I put it to rest but it had provided me with a starting point.

When my own drumming workshops had become more regular and popular, I went into a small studio to record an instructional drumming tape: ‘Beating Time – Making Rhythm’. A good portion of that material has endured well and I’ve used it widely in developed forms over the years. During my time in that studio, I took the opportunity to create a variety of well recorded loops and samples – basically tiny extracts of my own and other people’s music that I could later transform out of all recognition and re-invent creatively. That would stand me in good stead for my next recording adventure. I will expand on the morality of this in a later blog.

We are now in the mid 90s and, by this time, I had my own dedicated working space in the garden. This was a generous present from Helen to encourage the expansion of my efforts.  It was structurally a pre-fabricated concrete building which I then slightly soundproofed. It was more than a shed though perhaps a little less than a studio. It proved to be an important transitional working space for me even though I could only get one other musician in there with me.

At this time, I felt the need to add some new ingredients to my life – to expand my experience in a new way. I had recently returned from another trip to Kerala where I had been overjoyed to meet and start a new period of chenda drum study, now under Mattanur Shankaran Marar, one of the truly greats of his genre. Apart from the practical business of playing and learning, I had developed a serious interest in the theoretical and historical aspects of not just this genre, but of Indian and African music in the wider sense.

This interest led me to apply to SOAS – the School of Oriental and African Studies at London University – where I investigated the possibilities of an undergraduate degree course that included these areas of interest.

To gain a place here, as a mature student, I had to undergo a preliminary course of study at Morley College to re-acquaint myself with the mechanics of study and studentship. I also had to take enough lessons in music theory, reading and writing, to satisfy the requirements of entry. This took an academic year by which time I had secured a place at SOAS. It wasn’t the course I had hoped for as it was a mixed course that involved south Asian cultural studies and Hindi language as well as music. The first year was a roller coaster where, at times, I doubted my decision but at least I was in there and I had often heard that, once inside, students could change courses. Fortunately, after the first year, I was offered the opportunity to specialise in music. The second and third years were far better. I worked industriously and was happy to achieve a 2:1. Where to now?