No 2 –  Allusions, elusions and illusions

Not having any transport, I had little opportunity to get around and play with other people. For a while I couldn’t see any way forward without making some critical decisions.

After an unhappy term of study at North London Polytechnic, I dropped out and began a series of manual jobs – record packing, verge cutting, stockroom and warehouse portering and so on. The aim was to find a house or flat with like-minded souls where we could play music. This took five months, after which time we were installed in what we all saw as the perfect spot. One major bedroom doubled as the band room / social gathering space and it was perfectly positioned on the third floor, with no neighbours on either side and one below, who lived at the back of her flat and didn’t hear very well.

From here, we had the luxury of being able to play every day and a number of bands were formed with interchangeable personnel whilst I began to learn my craft – though still very much unschooled. I could keep time in 5, 6 and 7 beats in a bar before I could properly syncopate a strong rhythm in 4 (common) time. Evening rehearsals often had an audience of friends who dropped by for various reasons….but I digress. 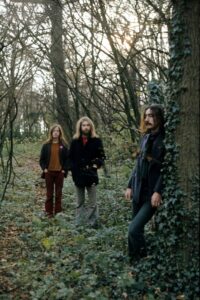 Four core residents quickly reduced to three, two of which, myself being one, were musical novices. The third, who had proper musical grounding, knowledge and ability stuck with us until circumstance, and opportunity drew us apart. The core band started out as Bygones and Trigons but somehow had become The Famous Tripods by the end. But, by that time, I had had two lessons from a respected player ! It doesn’t sound like much but they made a huge difference. They got me over some technical limitations and gave me a clearer analytical angle on my playing , and on drumming in general. This luxury of a home rehearsal space turned out to be a mixed blessing. It didn’t give us much impetus to get out and play gigs, although we were keen to ditch our day jobs, such as they were .

Bygones and Trigons, or The Famous Tripods:

My first unified drum kit (model – Olympic) was cheap but very decent. What made it peculiar was that, for reasons of needing to restrict the volume, I covered the drum heads with towelling cloth, which deadens the sound to a tuneless thud. As time went on, I cut away more of the cloth but never the whole lot and so, consequently, I never learnt about the subtleties of tone and about bouncing a stick – both crucial elements to understanding and doing. However, I pushed on.

During this time I had taken a government clerical job working locally. Such jobs paid salaries and were career orientated, but I vowed when I started that I would have saved the necessary pounds to buy my drumkit of choice and to have left the job within eighteen months. A year and a half later, I had my Hayman drums and my Paiste cymbals and I was out of the Home Office and into the Social Security Office – but as a claimant not a clerk. I had grown a small network of musicians and was getting out to play. The flat in Croydon had run its course. I had moved elsewhere and had started gigging semi-pro, supporting myself sometimes with pick -up work, plentiful then, and at others courtesy of the State. The towelling was off the drums for good !